What Do You Wanna Do Now?  Pilot Presentation

"What Do You Wann Do Now?" is a show about two 12 year old friends who spend their free time  in the basement coming up with absurd ways to fight boredom.

In this world everything that happens is accepted as reality. This may  include breaking the fourth wall, changing locations at will, talking  inanimate objects or anything else. 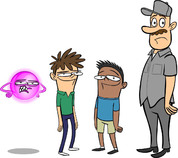 Tauer Baber, The Next Door Neighbor The boys often invite Tauer to partake in their madness and he happily complies. Every episode, Tauer has a different job and is voiced by a different celebrity guest. For example, his first line would be: “Hi, I’m Tauer Baber, the next door neighbor. This week I’m being voiced by Keegan Michael-Key and I’m a masseuse.”

Scruffles is a brash, mouthy, trouble-making shape shifter, who constantly provokes and teases the boys, which never fazes them.

FOOD - The boys run out of food. They decide to start a farm to raise  chickens. They start a school and teach the chickens how to go  grocery shopping for them. Bru and McPhillips get used to teaching  and continue their own studies. Bru gets a masters degree in History  and McPhillips gets his doctorate in wearing little glasses. During daily  intellectual tea time, they realize they still haven’t eaten. The chickens  from before show up with grocery biscuits. McPhillips enjoys his  biscuit, while Bru has fallen asleep.

REWARD - The boys find a missing dog but lose the “missing dog  reward” sign, so they decide to take flying pills and fly across town to  get some burgers. They fall asleep while flying and in their dream they  miss getting to meet famous skateboarder, Rob Dyrdek and an actual  dragon. Bummed out, they return to the basement and discover that  Scruffles has shape-shifted into a model train that leads them to the  missing dog reward sign.

PARTY- The boys decide to throw a party in the basement. They need  party favors, decorations and people to come to the party. They hold  auditions for the entertainment. Amongst those auditioning are Tauer  Baber, Rachel Ray, DJ Steve Aoki and Shakira. After that the boys  hold auditions for who will be attending the party. Finally everything is  set, and with 16 seconds left in the episode, we see a quick party  before everyone is sent home.

TAUER’S DATE - The boys accompany Tauer on a blind date and  give him fancy, fun things to say so he appears impressive and  attractive. They feed Tauer a beautiful opening line. At the next table,  a poet laureate overhears the boys’ words and suggests they become  poets. Bru and McPhillips go on a three month poetry slam tour all  over the world. Upon their return, they see that Tauer is still sitting at  the table with his date, waiting for them to give him his second line.  And when they do it’s revealed that his beautiful, blonde date has  been the shape-shifting Scruffles the entire time.